My sister-in-law, Rachael, came over to take some 5 month pictures of Baby A and a few of Princess M as well. I made sure Baby A was fed, diapered, and well rested from a long nap before she came, and she still decided to be fussy for the shooting. Rachael and I worked our tails off trying to catch a smile, and in the end we got a few. Considering how uncooperative she was, I'm surprised we got as many good shots as we did. But once again, Rachael came through with some fantastic photos that I'm completely thrilled about! Thanks, Rach!!

I understand that Rachael is starting to offer her talented skills for a VERY reasonable fee. Check out her photo blog at http://picturesareworth.blogspot.com/
Posted by Anonymous at 10:16 PM No comments:

More Dos and Lots of Pics

I found this picture taken a while ago of the last time Princess M got caught in my makeup.

The other day I taught M how to use a mouse and found her a couple free online toddler games on the Internet. She LOVED it and asks to play her games everyday now.

She also LOVES to get her "princess" hair done every day. I've been excited to try out all these new hairstyles on her. Inspired by a lovely, homemade gift M received for her birthday (the cute silver flower you can see below,) and the new excitement over "princess hair", I bought a few plain metal clips and pulled out the hot glue and old, fake flowers we have around the house. We spent a fun afternoon creating new hair clips. I thought they turned out really neat. You can see M wearing one below.

Here's some of her more recent dos:

This is the do Baby A is sporting these days:

Well, I finally figured out how to upload mp3s to the internet and thus to my blog. Here's a bunch of songs I've been collecting from Princess M. I've also added them to the blog playlist on the side of the blog.

I also captured M saying the quote we listed in the "Kids say the darndest things" section on the side. You can go there to hear it first hand.
Posted by Anonymous at 10:18 PM 1 comment:

Although M is a true princess in every sense of the word, she has never ever liked having her hair touched. She doesn't like brushing, styling, or even just fondly stroking. I was looking at a very cute blog here, wistfully wishing I could try some of the very cute hairstyles demonstrated there on my dear daughter, when she walked into the room, fresh from a nap. I started showing her some of the beautiful "princess" hairdos and asked if she would let me try some on her. She actually said YES!! And she seemed pretty excited about it to boot!

She even sat still long enough to let me try 2 different styles out! She was so proud to show her daddy, and is very excited to wear one to church where everyone will be able to see her.

I hope this is the beginning of a new era in hairstyling for my little princess. 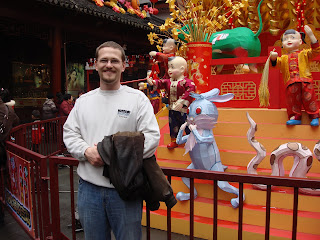 Last leg of the trip!  is the NYC of China.  I read in one book that the Chinese govt would be elated if overtook as the financial, etc capital of the country.

I have seen the museum and walked the Bund, a riverwalk of sorts.  After 9/11, I spent some time in NYC and I forgot, until now, how much I enjoy the vibrancy of the city environment.  This is especially true of the evening hours.  Walking down the open air malls and seeing all the people, the lights and the colors… ahh what fun.

Near to the ancient capital of China, aka Xi’an, is a living museum for the Terra Cotta soldiers. After uniting China, the first emperor spent 40 years constructing himself a tomb. Over 750, 000 people were engaged in the construction process at one point or another. So far, archaeologists have uncovered 4 distinct dig sites where these soldiers were to be placed as sentinels, guardians and counselors to the emperor after he died. Dig 1 is the largest and has thousands of soldiers there. Dig 3 is the headquarters and guards of high-ranking officers, Dig 2 has archers and other types of soldiers, and Dig 4 has no soldiers in it. Experts have discerned that there were to be terracotta soldiers placed therein, but the effort, though 40 years long at that point, failed.

After this first emperor died, many peasants were outraged at his cruelty and they stormed Dig one and destroyed much of his army there. The Digs were hidden underground and were not linked to one another, so the other Digs, when found, were not as damaged.. not that the passaged of 2000 years won’t have an effect all of its own, of course.

O, what cruel people can accomplish with limitless resources and lots of time.

Posted by Anonymous at 7:13 PM No comments:

Ok, so the resigned compliance didn't last past that first day. It's been a major fight to take her eye medicine since then. It stings a little, so I can't blame her for being so difficult. I know because I've been using her medicine myself today. Guess what I woke up with this morning? All I need now is for Baby A to get sick too. That would really top the cake.

It's been a LONG weekend. I can't wait for Alex to get home tomorrow!

PS-M just came down the stairs smelling of puke and informed me that, "I'm sorry, but I HAD to throw up all over your bed." Today just keeps getting better.
Posted by Anonymous at 4:14 PM 1 comment: