This last weekend was Labor Day weekend. In addition to seeing the beautiful balloon-glow event Saturday evening, we went to see the ballloons launch on Monday morning. We caught up with John and Rachael at the park along with a number of other families that attend our ward. It was a fun time for the kids.

The balloons almost did not take off due to weather conditions. When we arrived at the park, the weather condition flag was showing yellow. Green, of course, is the all-clear indicator. Yellow indicates conditions are not optimal for balloons but it might still allow some intrepid ballooners to take off they wish (I may be mistaken about that--they might not be allowed to lift off unless the flag shows green.) Lastly, if the flag is showing red colors, the pilots can't lift off.
Skimming the lake. That is what makes lifting balloons off from Colorado Springs a bit different from other locations. The park that acts as the launching pad has a lake in the middle of it surrounded on most sides by trees. So, the pilots have to launch their balloons, clear a short tree line and touch their baskets to the surface of the water and then get up and over the trees on the other side of the lake. It's exciting to watch the pilots attempt this. Some pilots come down, get close to the water, and then fire too much hot air and miss the lake. 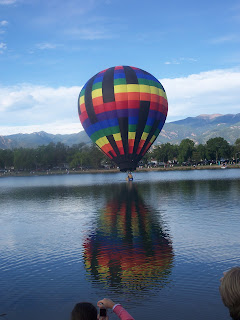 Others come down and sink their baskets into the water by a foot or so and are blasting their 'jets' to get up and out of the water asap (this also severely retards the speed of the balloon too). This guy looks like he was more than foot into the water. 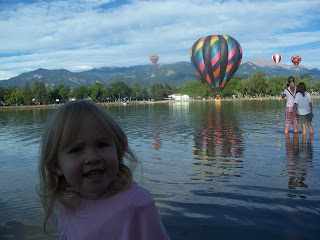 The best performance is when a balloon just barely touches the surface of the lake and sort of coasts along for a bit before boosting up and over the trees on the other side. Two years ago, nearly all pilots attempted to skim the lake, but this year, due to the direction of the wind, most pilots simply took off into winds that carried them in other directions. This year, one pilot tapped the lake, lifted up a bit and then came back for another touch before moving on.
(you can see M saying 'cheese' for the camera in her cute poncho.) 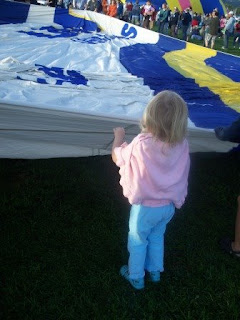 M really enjoyed the balloons. She had the chance to help open up the United Van Lines balloon.
For me, seeing the balloons reminds me of one of my few memories with my father. He had taken my brother, Mike, and me to see balloons launch somewhere in Maryland or Pennsylvania when I was very young. All I really recall is the coldness of the morning, the dew on the grass, that it was really early and the box of donuts that we enjoyed-- A rare treat for us. You know, the kind with 4 plain, 4 powdered, and 4 chocolate covered... I could never understand why they wasted 4 good donut spots with plain ones. I wonder if M will remember this year's balloons. 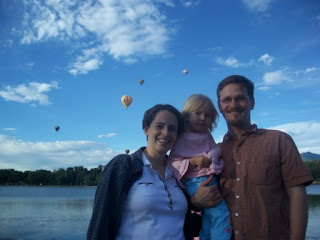 We went to IHOP for breakfast and went home for naps. We finished off the day at a nearby park with the Schroeders and the Austens for a picnic dinner. I got to fly a kite which was a lot more fun than I ever expected it to be. The kids played in the playground. I'll see if we can get a picture or two from the other parents that were there.
Oh yeah. JoDee and I watched 'Next,' a pretty good flick with Nicolas Cage, Jessica Biel and Julianne Moore (http://www.nextmovie.com/). Inspired by the same author (http://www.philipkdick.com/) whose short stories gave us Minority Report, Blade Runner and Total Recall, this movie was a really fun one that we both enjoyed.
Posted by Alex at 3:25 PM

Great jumpin' jehosaphat! Good to see you all on the web!

Wow, your little one is growing up fast! We have a blog too but I am not the best at keeping it up. I try.