So, a few days ago, I took M with me to run a few errands (something I increasingly do as JoDee's pregnancy progresses) around town. One of the stops was at Blockbuster. JoDee had been excited to watch the movie Emma http://www.youtube.com/watch?v=6WpLozLqLZ0 with Gwyneth Paltrow and I was tasked with the job of finding it.

Well, after I had found the copy that I hoped was the right one (I didn't know at the time that the Paltrow Emma was the one JoDee wanted to see), I went up to the register to rent it and found out I needed a new Bbuster card. The clerk gave me an application and the whole process took some time.
During this 10-15 minute period of time, M was playing with the candy in the aisle and, periodically, bringing a package up to me and showing it to me. I responded once with, "Yes, honey, that does look yummy! Would you mind putting it back?" And she did.
A few minutes later, she brought another piece of candy up to me: "Hmm, what kind of candy is that?" She told me she didn't know, but that we needed it. So I told her I was sorry but we weren't going to buy it.. unless she had some money. I asked her if she did and she said no. "I'm sorry, sweetie, but I guess we can't get it. Would you mind putting it back?" And she did.
Every parent knows how nice it is not to have to nag in public and I was grateful for M's good behavior. I wasn't the only person pleased by M either. A guy in the line behind me made a comment about what his grandchildren would be acting like and said he couldn't believe she was putting the candy back. I laughed and said, "Well, if she doesn't, she doesn't get to come with me next time. Not that she always behaves, mind you." The clerk made a comment about M and about how terribly behaved his 2-3 year old nephew was. This generated a short chat about the challenges his brother was facing as a single father and I wrote down the name of a book that had really helped JoDee and me with M.
Well, after all that fuss, I finally got the movie and was nearly leaving the shop when a lady came up to M and another boy that was behaving well and gave them both a small bag of candy that she had bought them for being such good children. M thanked her for the treat. 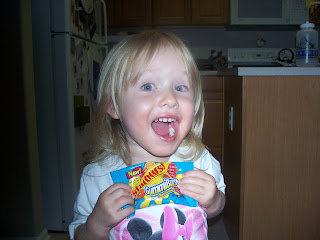 On the way home, I found myself musing at how M got rewarded for good behavior.. how pleased I was at her good behavior and how I hoped she wouldn't expect to get something every time she acted well in public. :D
Found something else that took place since my last post. M served a nice picnic breakfast or lunch, I have no idea what time of the day this took place but I'm still wearing my 'jammies,' so I'm hoping it was a breakfast event. 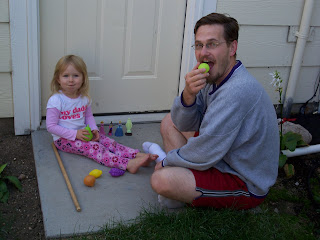 If you look closely, you can see some of her princesses and a little statue of Mary that JoDee had to buy while in Russia.. something about a glow-in-the-dark Mary that she couldn't resist.